As with any building, a few simple precautions should be taken to safeguard your thatched property – especially in connection with its chimneys. For example: 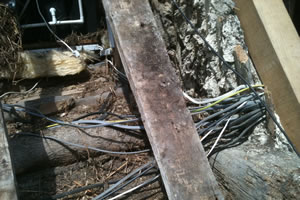 Running inside the roof and touching the thatch, this dangerous DIY wiring was discovered by Dominic Meek while he was stripping away the old straw. If the live wires had become wet or been chewed by a rodent any one of them could have started a roof fire. East Anglia Master Thatchers Association recommends all wiring should be channelled through steel ducting in the roof space. 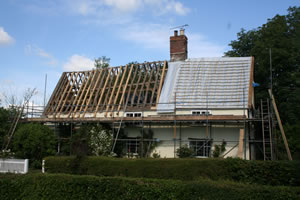 This roof was in such poor condition the thatch had to be completely removed to allow Dominic to replace many of the rafters and carry out major timber work. The fireproof covering is held down with counter-rafters and new battening. 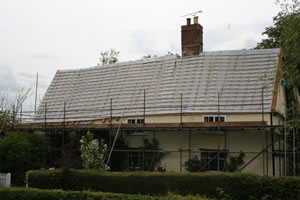 Here, the fireproof membrane covers the entire roof. By creating a barrier between exterior and interiorand, it provides more time for the fire services to extinguish a roof blaze before it reaches the building’s main timbers. 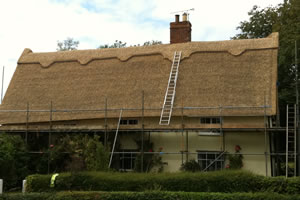 With its fireproof covering now neatly and discreetly in place, the roof has been beautifully thatched in long straw, complete with a block-cut ridge.